of the Middle East

SCROLL DOWN TO ENROLL

﻿the foreign to the familiar.

Magic Carpet Ride is our online arts integration course in music, dance, and culture of the Middle East for students in grades 3 through 5.

In the interactive videos and worksheet lessons, children find common ground in the fun of learning new ways to communicate—in music and math, in dance and movement, in geography and Arabic language.

Watch this short video for an overview of the course content and how it works.

"This (live) program was wonderful...The program was excellent and connected to what we were studying at the time. The students were engaged and had the opportunity to learn about another culture." 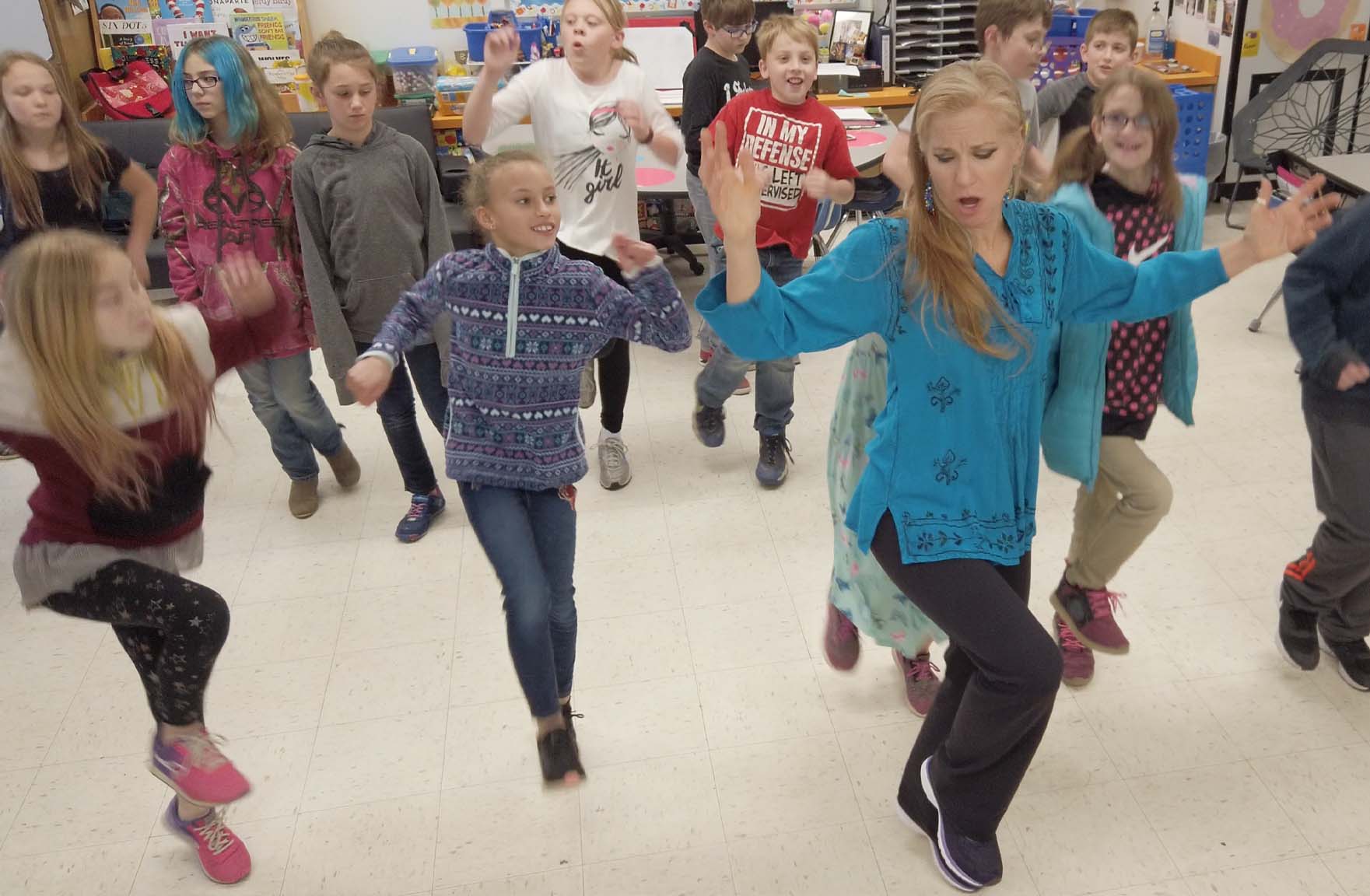 We include multiple disciplines in the integrated, project-based learning.

Mention Aladdin and his magic lamp, and most kids hurrah. Yet, despite Arabic being a Department of State top 5 critical language, and our communities—both local and virtual—becoming multicultural, most kids know little of the Middle East.

Magic Carpet Ride helps kids to fit together the puzzle pieces of learning about the Middle East and how it relates to their own lives. With our interactive videos lessons, paper-and-pen exercises, and physical activities, students integrate:

"One of the best things that you do is gradual steps. It's wonderful the way you teach. You listen to the students as you teach. That's one of the most important things a teacher needs to do, and you do it superbly well."

Kids move and dance as they work through the course.

A major part of the course is learning the Levantine, or Eastern Mediterranean, folk dance called the Debke. It's a social dance that easily adapts to learning independently at home or with a group in a classroom.

Because students learn the dance to live traditional drumming in the course, they are simultaneously connecting math concepts with rhythmic skills, locomotor skills, body management, and movement patterns as they learn each dance step.

"It's really exciting to see all those kids dancing and learning new steps and stepping into the unknown." 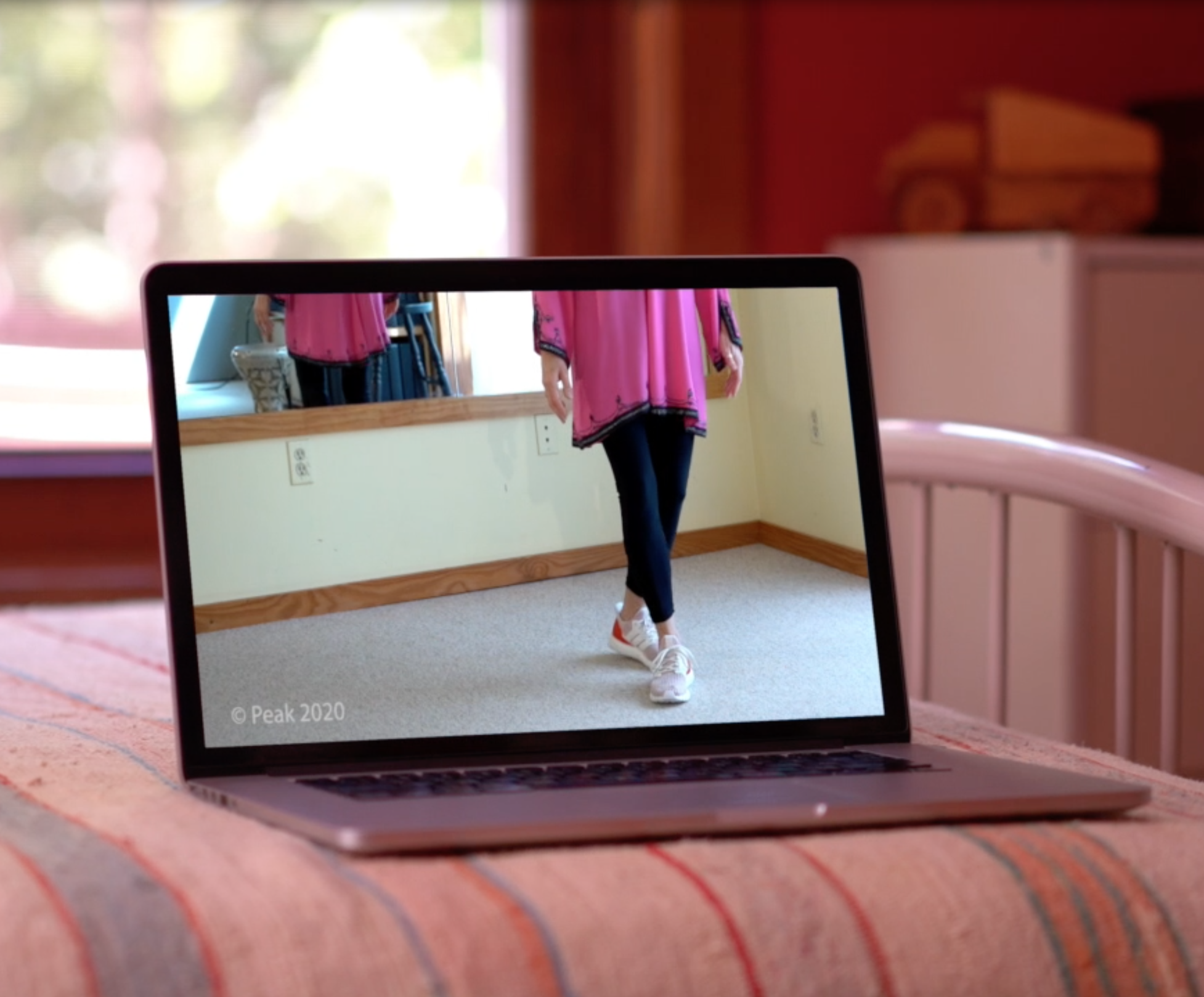 Even the most antsy kids stay engaged.

Students of this age are naturally energetic, and especially now, they have seemingly infinite possibilities for distractions. With that in mind, we've crafted Magic Carpet Ride's lessons to be a series of short, interactive videos to keep even the restless student engaged.

There is no old-fashioned "voice-over" or memorized script, and each video is professionally produced with superior quality audio and cinematography. In each video, we address the student directly and leave time for him/her to answer our questions and do what we're learning as if we're right there in person.

"The love you have for people came across clearly...in how you teach the children. How beautifully you work with them to show them acceptance of others."

We offer 3 ways for kids to do the course. 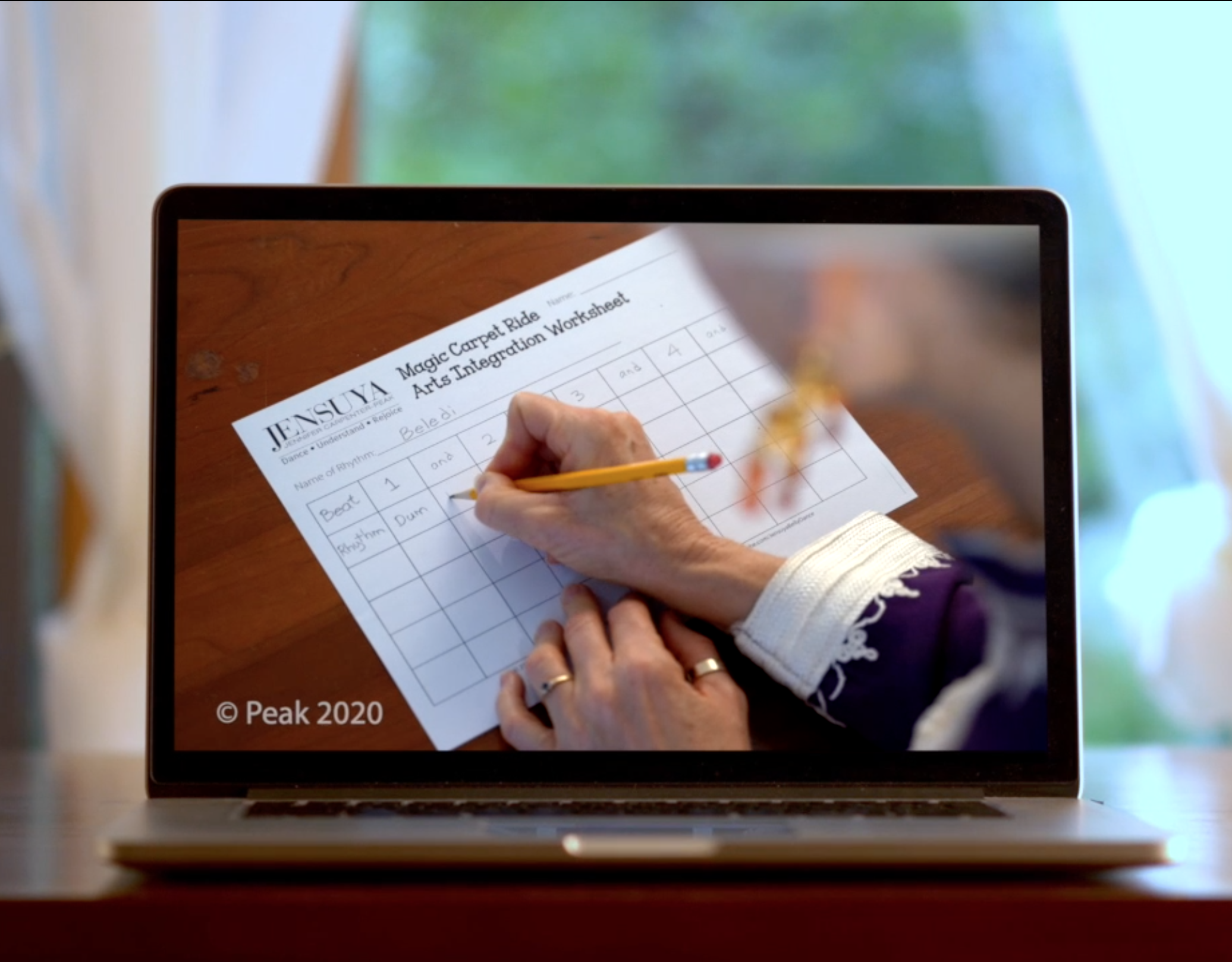 "I liked learning the words and what they meant. I forgot that Debke meant stomp! I liked listening to Beledi, or country, that Bob played while I danced to it." 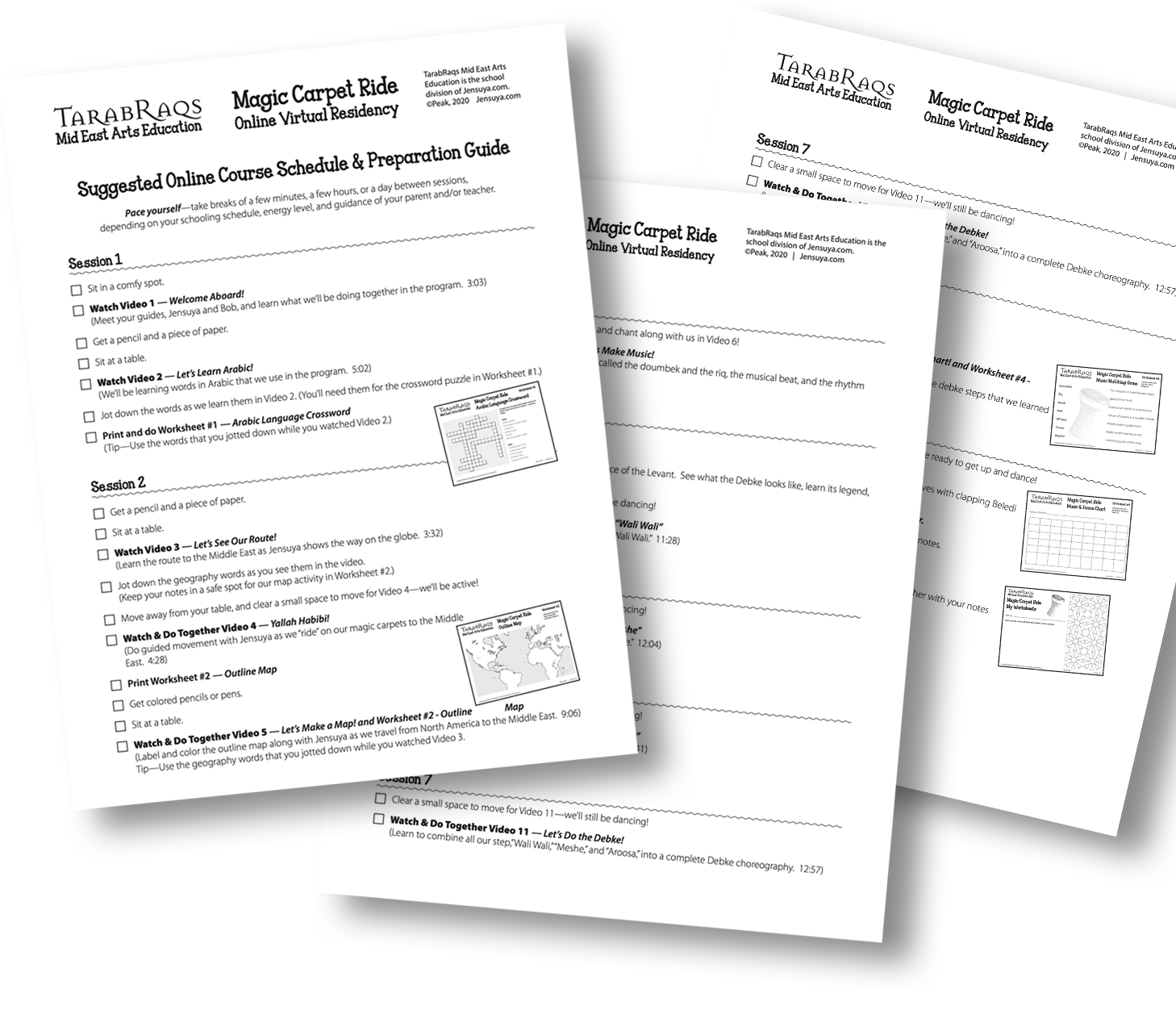 It's easy to manage—you set the schedule.

We have organized the course in learning sessions so you can tailor the schedule to fit your learning goals, academic calendar, and the pace of the student. To help you and the student stay on track, we've created a printable suggested schedule with check boxes to keep track of progress.

And, in case a printer is not available, we've included an end screen on each video with what to do next, step by step, and we show how to do the worksheet activities without a printer.

Virtual learning that gets kids moving. They learn to: 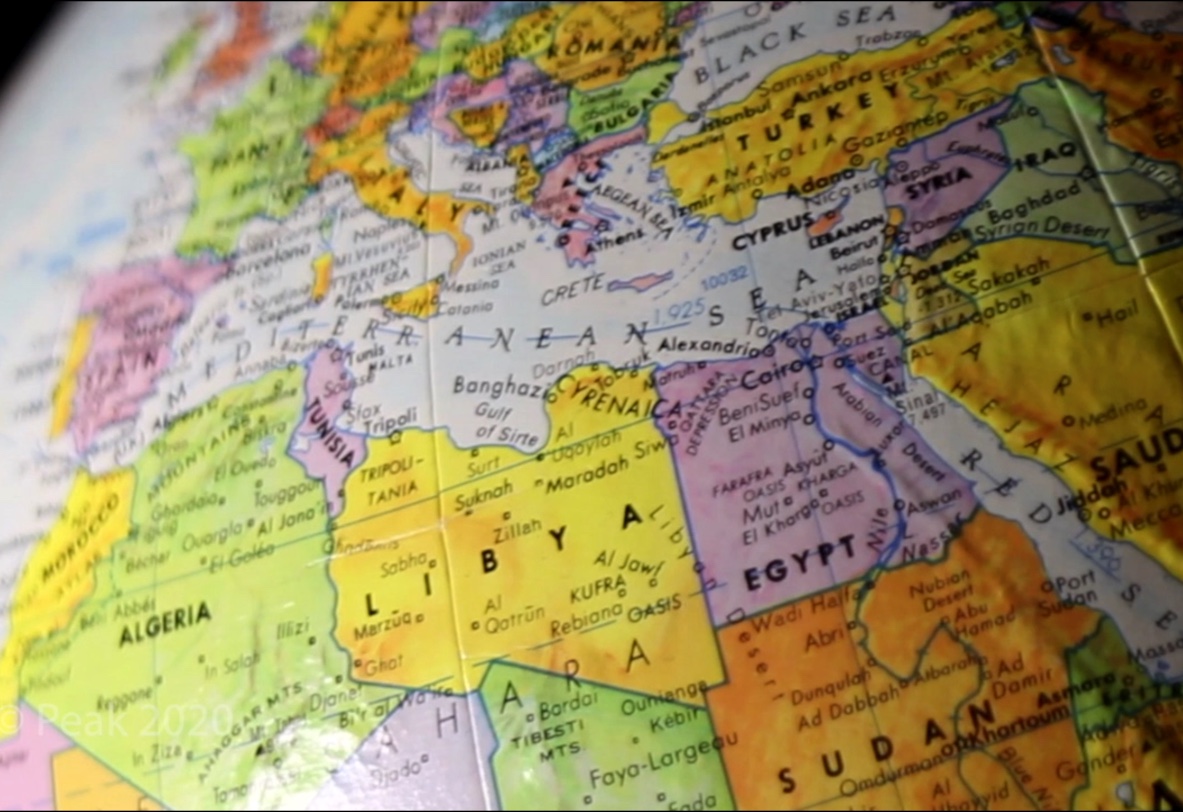 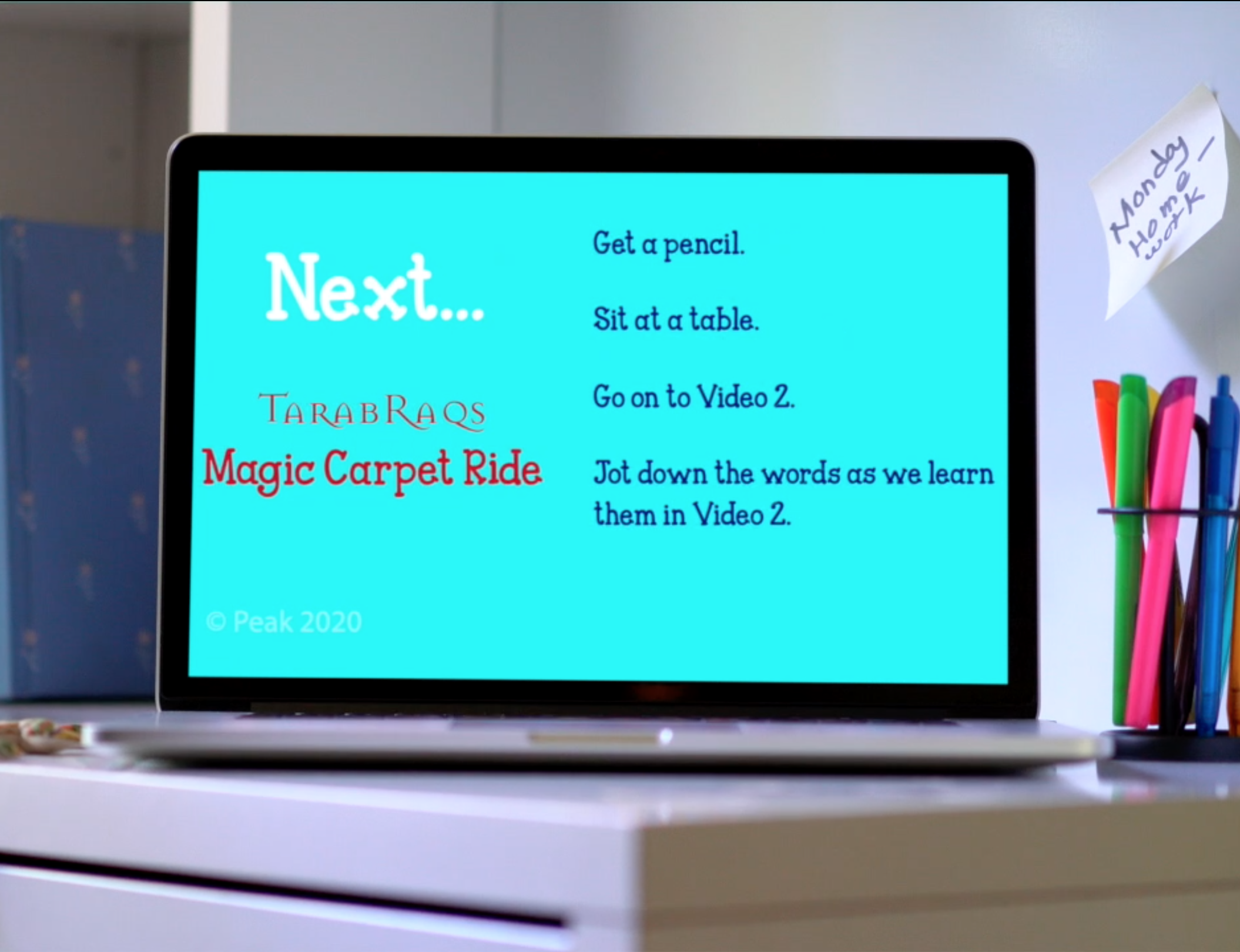 Note: the course can be completed without a printer. We show how in the videos and the Preparation Guide.

COVID-19 has been devastating for us all, and it underscores even more the need to bring quality programs to students. Our goal is to help as many students and school districts as possible, and so we're offering discounts in excess of 80% off of the live program price.

Once you've selected and paid for your virtual residency option, we will send you, the teacher, a corresponding multiple-use coupon that you and your students will be able to use to access the course. You'll have the corresponding number of months from the time of purchase to complete the course. We've allowed you and your students plenty of "wiggle room" to complete the course and do the activities multiple times.

Hailing from Berkeley Springs, West Virginia, we have been featured by the American-Arab Anti-Discrimination Committee, the American Turkish Association, and twice by the U.S. Government-funded Middle East Broadcasting Networks, an Arabic-language news organization with a weekly audience of more than 25.7 million people in 22 countries in the Middle East and North Africa. If there were only one thing that I could teach, show, inspire our students to do, it would be this—embrace your fear, then dance with it. Let's get started!